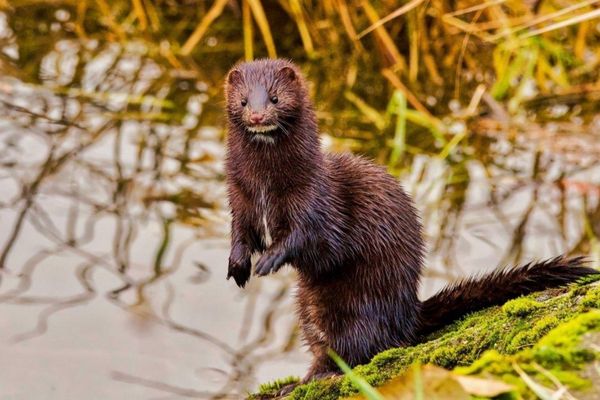 I have always been fascinated by animals and how they can be so different from one country to another. In this guide, we’ll focus on the many animals that live on land, in the sky, and under water in Greece.

I have divided the guide into 4 categories:

Greece is a European country located in the southern part of the continent and surrounded by the Mediterranean Sea. Along with Egypt and Italy, it is the most important country in the world in terms of history and culture. It borders Bulgaria, North Macedonia, Albania and Turkey, and its capital and largest city is Athens, with over 664,000 inhabitants (but over 3,753,000 if you include the metropolitan area).

An interesting part of the country that I wanted to encounter was its wildlife. In that light, I have listed the best of them and I hope you will like to know which animals live in Greece.

The Mediterranean monk seal is a species of monk seal that inhabits many parts of the Mediterranean Sea and the Atlantic Ocean. There are about 3 to 4 populations left and less than 700 individuals, which is why it is considered endangered, but in reality it is now on the brink of extinction.

The world’s rarest pinniped species is diurnal and eats a variety of fish and molluscs, such as squids, octopuses and eels.

The golden jackal is a species of wolf-like canid native to Eastern Europe and southwestern, southeastern, and southern Asia. It is smaller than the smallest gray wolf subspecies and can vary in color from pale yellow to dark beige depending on area and season.

This canid lives in valleys near water and is rare in rocky and snowy areas such as high mountains. It is a very social and adaptable species that eats anything from fruits and insects to small ungulates such as domestic buffalo calves.

Speaking of which, the gray wolf, more widely known as the wolf, is a large species of canine native to the Northern Hemisphere, from Eurasia to North America and even Greenland. It is the largest member of the canid family and specializes in cooperative game hunting.

This animal is primarily a carnivore that eats large mammals as well as small rodents, livestock, carrion and even garbage. This adaptability explains the widespread success of the gray wolf as a species, and many subspecies are currently recognized.

The American mink is a species of semi-aquatic mustelid native to North America, as its name suggests. What is it doing in Greece, you ask me? Well, it was introduced to the Old World in the 20th century for fur-farming purposes, and its range is now growing.

These mink suffer from infestations such as fleas and ticks and can transfer some diseases between cattle, sheep and mink.

It has been locally extirpated from Britain since 1000 due to over-hunting. In antiquity, it was used to fight in arenas in ancient Rome and was almost entirely carnivorous, but the brown bear has since adapted and is now more omnivorous.

The kree-kree, also known as Cretan ibex, agrimy or Cretan goat, is a species of goat native to the Eastern Mediterranean. Nowadays, it can only be found on the island of Crete as well as three smaller offshore islands.

In the 1960s, the Cree-Kree were critically endangered, with only 200 individuals remaining. Since then, conservation efforts have been made and there are now about 2,000 animals left. This species should not become endangered anytime soon as it has been extensively domesticated.

The marbled polecat is a species of small mammal native to central and western Asia as well as southeastern Europe. It inhabits dry areas and grasslands and, like other polecats, is known to emit a strong-smelling secretion when threatened.

This polecat is active mostly in the morning and evening and has poor eyesight. To compensate, it depends on the intensity of its smell and eats squirrels, hamsters and other rodents on the ground.

The Balkan lynx is a subspecies of the Eurasian lynx and is native to southern and southeastern Europe and Russia. Known as the national symbol of North Macedonia, it appears on a denar coin.

The remaining 35 to 40 Balkan lynx in North Macedonia live in a national park, and this medium-sized wild cat has been on the verge of extinction for more than a century: fewer than 50 individuals remain in the world.

From one feral cat to another! The European wildcat, less endangered than the Balkan lynx, is a species of small wildcat native to Europe, Turkey, the Caucasus and Scotland. It lives in forests and has gray and brown fur.

Like other wild cats, the European wild cat is mostly nocturnal and feeds on rodents, as well as small mammals such as ground-dwelling birds.

The mute swan is a non-mute species of most Euro-Siberian swans. It is so named because it is much quieter than other swan species and is a recognized species in North America.

This swan is the easiest to spot, as it does not mind being around humans. Interestingly, it is the national bird of Denmark and is a somewhat important figure in popular culture, for example appearing in the famous ballet “Swan Lake”.

The greater flamingo is a species of flamingo and is the largest and most widespread. It can be found in Africa, the Indian subcontinent, southern Europe, and the Middle East, and gets its characteristic pink plumage from pigments in the organisms that inhabit its feeding grounds; Chicks are born with gray plumage and only develop the infamous pink color during their lifetime!

The striped dolphin is a species of dolphin found in temperate and tropical waters of the world. It is extensively studied and occurs widely in the North and South Atlantic.

These dolphins have been hunted by Japanese whalers for decades, killing 21,000 a year. In addition, it eats fish, krill, crustaceans and squids, and its dietary preferences vary from region to region.

The Eurasian otter, also known as the Old World otter, Eurasian river otter, or common otter, is a species of semi-aquatic mammal native to much of Eurasia and northwest Africa.

Found from the Iberian Peninsula to the eastern coast of China and Russia, the otter inhabits waterways and coastlines and feeds on fish.

Strongly territorial, the Eurasian otter is endangered in some parts of its range, but recovering in others.

The red deer is one of the most common animals in all of Europe. It lives in dense forests and comes out at night, feeding on a variety of grasses. It is a ruminant with a four-chambered stomach and is rare in parts of Europe. Now, it has recovered significantly and is much easier to see.

This deer has a long history of interaction with humans, is famous for its antlers, ornamentation and its tasty meat.

The chamois is a species of goat-deer native to European mountains, such as the Cantabrian Mountains, the Balkan Mountains, the Caucasus and the Carpathian Mountains. It lives in very high rocky areas and has been introduced to the South Island of New Zealand.

Females and their young live in herds of about 15 to 30 individuals, while males are solitary for most of the year, except during the rut, when they engage in fierce battles for the attention of females.

The beluga whale, also known as the melonhead, sea canary, or white whale, is a species of cetacean native to the arctic and subarctic regions of the planet. It was introduced to other parts of the world, including Greek waters.

This extraordinary creature is adapted to living in the Arctic, has no dorsal fin, which allows it to swim easily underwater, and a characteristically large head that is especially useful for echolocation purposes.

Despite being considered a highly invasive species in some countries, particularly Australia, there is no doubting the red fox’s worldwide success. This species is incredibly adaptable and can tolerate a wide range of habitats: it eats whatever it can, tolerates human disturbance and colonizes more and more regions, making it one of the most widespread animals in the world.

This fox lives either in pairs or small families and mainly eats rodents and birds.

The demoiselle crane is a particularly graceful species of crane native to central Eurasia, from the Black Sea to northeastern China and Mongolia, as well as Turkey.

In Europe, this bird species winters in Africa, while the Asian subpopulation migrates to the Indian subcontinent. Because of its appearance, it is an important part of Indian and Pakistani culture, poetry and literature, where it is considered a symbol of beauty.

It is the most widespread species of oystercatcher and is the national bird of the Faroe Islands. It feeds using a bright red and orange bill, particularly useful for opening bivalve crustaceans such as oysters, but not only because insects are also often caught.

The European badger is a species of mustelid native to almost all of Europe. It is considered to be of least concern, as it is quite common in its range, which is very wide.

Although it is officially classified as a carnivore, this animal is actually more omnivorous, as it eats cereals, tubers, insects, earthworms and even carrion. It can be exceptionally strong when threatened or cornered, so you should be careful when approaching a badger.

The European fallow deer, also known as the common fallow deer or simply the fallow deer, is a species of ruminant mammal native to Turkey, the island of Rhodes (which belongs to Greece), Italy, and the Balkan Peninsula. Throughout history, it has been recognized in Europe and other parts of the world as well.

Females are called doos, while males are known as bucks and are famous for their horns covered in velvet.

The white cuckoo is a species of large bird native to Europe and western Asia and winters in sub-Saharan Africa and the Indian subcontinent.

Despite its peaceful and iconic appearance, the white crayfish is a carnivore that preys on a wide range of prey, from insects and fish to small mammals and birds. It finds its food in low vegetation and shallow water and kills it with its sharp beak.

The great cormorant, also known as the black shag, black cormorant, or large cormorant, is a large species of seabird native to Eurasia, Australia, and the Atlantic coast of North America. Although it is quite common in its range, which is very wide, there is a very rare variation that is completely white. However, he suffers from poor eyesight and hearing and rarely survives in the wild.

A great way to end this list. The humpback whale is a species of baleen whale that lives in every ocean and almost any sea in the world.

Well known to whale watchers for its unique surface breaching behavior, this whale species migrates up to 16,000 km / 9,900 miles per year! They feed in polar waters before migrating to tropical and subtropical waters to breed and give birth.

So there you have it, these are my 24 animals found in the wildlife of Greece. I hope you enjoyed this list and learned something new today.

If you want to know more about country animals, feel free to keep reading, because I have a lot to tell you: