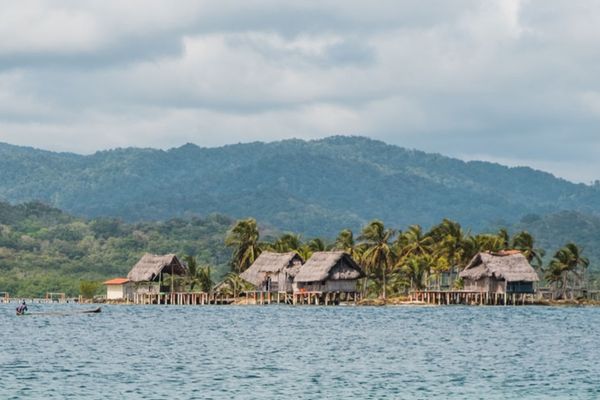 Cloud-forested highlands, idyllic palm-topped islands, vibrant indigenous cultures and riotous festivals, Panama has no shortage of things to do. The Panama Canal and Central America’s most vibrant capital city – Panama City – top the list of famous Panama landmarks, but also surprisingly diverse for such a small country.

In Panama you will find many places to visit that are wild and amazing, and off the beaten track.

Visitors to the capital naturally head to the first settlement, Casco Viejo – founded by the Spanish in 1673, two years after the original settlement, Panama Viejo, was sacked by the Welsh buccaneer Henry Morgan.

Home to most of the capital’s historic attractions, this area offers great boutique accommodation, casual cafes and fine dining, sprinkled with ancient churches and restored mansions, as well as an increasingly trendy nightlife scene. The ruins of Panama Viejo, the first European city on the Pacific coast of the Americas, about 8 km (5 mi) northeast of the center, are the only other significant ruins from the Conquest era.

The ruined colonial fort of San Lorenzo is a Panamanian landmark that is an impressive reminder of the defenses needed by conquering soldiers to protect their looted treasures from marauding pirates.

It is perched high on a rocky promontory, guarding the mouth of the Rio Chagres. These relatively well-preserved ruins testify to its importance during the Spanish colonial period. Its spectacular location, beautiful views of both the brooding river and the glittering Caribbean, its seclusion and jungle setting, make it a more accessible and more exciting destination than the more visited Portobello Castle, and if you avoid the cruise ship tour groups – especially mid-week in the rainy season, you’re on your own. You can take a seat.

The fort is located in the 120-sq-km (46-sq-mile) Área Protegida San Lorenzo, a region of secondary forest and marshland that provides excellent birdwatching. As many as 435 species have been recorded, some of which can be seen on a small forest trail along the road leading to the fort.

Construction of the original sea-level earth-and-timber fort began in 1595 to protect Spanish boats laden with booty from Chagres to Portobello from attack by foreign ships.

Although Francis Drake failed to capture the position in 1596, it fell to one of Henry Morgan’s privateers in 1670, enabling Morgan and his band to advance unimpeded up the river and destroy Panama City. The fort was built in the 1680s in coral stone on its current elevated site, where it was eventually demolished by the British in the 1740s.

The attack was apparently carried out in retaliation for the wounding of a British merchant captain named Robert Jenkins by the Spanish Coast Guard, known oddly as the Battle of Jenkins’ Ear.

Although San Lorenzo was rebuilt and further strengthened, the fortifications were never really retested. Although it was used as part of US military defenses in World War II – note the anti-aircraft platforms still visible next to the tower. To explore the fort, cross the drawbridge (not original) and pass through the smart, squat stone-and-brick guardhouse, the fort’s main entrance.

The Panama Canal is undoubtedly the king of Panama’s tourist attractions. Running 77km (48 miles) across the isthmus between the Pacific and Atlantic oceans, spanning the provinces of Panama and Colon, the Panama Canal is a massive engineering feat and a triumph of human effort and sacrifice – a truly stunning sight and justifiably the country’s most visited sight.

What’s more, it can easily be explored on a trip to Panama City. Remarkably, it winds its way through pristine rainforest and a vast artificial lake. The four national parks of Soberania, Camino de Cruces, Chagres and Portobello, created to protect the canal’s watershed, offer walking opportunities along the historic Camino de Cruces and partial remains of the Camino Real.

Of the four, Parque Nacional Soberanía is the most accessible, with some excellent hikes and birdwatching opportunities in the tropical rainforest, while Isla Barro Colorado – the plum in the middle of the canal – is home to the world-famous Smithsonian Institution.

Both support exceptional levels of biodiversity and are easy day trips from the capital. Scattered along the shores of Lago Gatun and the banks of the Rio Chagres are various Embera communities that welcome visitors.

From seriously hedonistic carnivals to religious festivals of Corpus Christi or small-town patrons, it’s hard to beat the fun on the Azuero Peninsula.

Expect a strong country feel, flamboyant costumes washed down with a lash of Seko,  and  upbeat music and dancing. Festivals are hybrid events: sacred religious ceremonies combined with pagan rituals and hedonistic excesses; Traditional folk groups are followed by DJs playing reggaeton, bachata and salsa;  and stylized Andalusian-inspired dances such as  the tamborito (Panama’s national dance) and the punto, tinged with African and pre-Columbian rhythms using drums, gourds and seed pods .

More than 500 festivals are held here every year. Some to look for include January’s desfil de las mil poleras , a  tourist-oriented parade  of a variety of  Panamanian poleras in Las Tablas; Carnival in February (the country’s grandest celebration is again held in Las Tablas); Patronales de San Juan, diablicos sucios  , five days of costumed fun in June with folk dances, fireworks, and paintings from the beach at Patronales de San Juan; and the Festival de Manito in August in Ocú.

Just a short drive from Panama City, this wildlife paradise is almost guaranteed to see toucans, parrots, sloths and monkeys and is undoubtedly one of the top tourist attractions in Panama.

Extending north and west from the park office, it hugs the canal and skirts Gamboa, covering more than 190 sq km (73 sq mi). It contains the lifeblood of the canal, the majestic Río Chagres, which you can explore by boat or kayak; There are several well-maintained trails on either side of Gamboa, including part of the historic Camino de Cruces and the world-famous birding hot spot, Camino del Oleoducto.

. The trails are not particularly close to each other or to the park office, however, making logistics difficult unless you have your own transportation or are going as part of a tour.

Several Panama City agencies offer hikes to the Camino de Cruces and Sendero del Oleoducto, but you can hire a ranger as a guide from the park office if one is available – a much cheaper option and one that supplements their low income. However, they are unlikely to speak English.

A popular Caribbean destination and one of Panama’s best places to visit, Bocas offers a chilled party scene, great drinking, dining and dancing, as well as jungle islands, water sports and beaches galore.

The Caribbean archipelago of Bocas del Toro (‘Mouths of the Bull’), near the Costa Rican border, is one of the most beautiful parts of Panama. It’s also one of the most isolated – the mainland of the province is connected to the rest of Panama by a single spectacular road that carves its way over the continental divide, often blocked by landslides during heavy rains, while a boat ride to reach the island chain.

For most people, Bocas means the tropical islands – Isla Colón and Bastimentos, in particular – that attract more visitors than anywhere else outside of Panama City and the canal.

Some of this natural paradise is in the Parque Nacional Marino Isla Bastimentos. Some visitors, however, come for the nightlife: venues for cocktails, waterfront dining and dancing until dawn. Yet the archipelago forms only a small part of the province, which in 1997 lost large swaths of land to the eastern comarca of Ngabe-Buglé.

The lowlands of the mainland, often dismissed as an endless stream of banana plantations. , also offers some notable Panama attractions.

Inland, on the banks of the picturesque Rio Teribe, a stay with Naso, one of the lesser-known indigenous peoples, offers the opportunity for intercultural exchange in a stunning natural setting, with the ability to venture into the remote but spectacular Talamánca mountain range; Its towering peaks form the backbone of the vast Parc Internacional La Amistad, home to an astonishing array of wildlife.

It’s not easy to get to, but the rugged mountains, high rainforest canopy, and immense biodiversity of the country’s largest wilderness area – and a UNESCO World Heritage Site – are worth the effort. At 5,790 sq km (2,235 sq miles), Parque Nacional Darién is the most extensive protected area in Central America.

Created in 1972, it surpasses all of Panama’s national parks in both size and prestige. Yet it is one of the least visited protected areas in the country because reaching the park requires a lot of organization.

That said, the awe-inspiring greenery dotted with rivers and waterfalls and teeming with wildlife is well worth the time and money, providing a truly magical experience.

Comarca Guna stretches along the Caribbean coast, home to palm-topped islands and the indigenous Guna, who have fiercely defended their lives and way of life against outsiders for centuries.

Visiting a Guna community has to be one of the top things to do in Panama. The Guna (pronounced ‘Guna’ or ‘Kuna’, depending on the dialect) – or Dule (pronounced ‘Dule’ or ‘Tule’), as they call themselves – are Panama’s highest-profile indigenous people.

It is a vast semi-autonomous region (or  comarca ) on the eastern Caribbean coast that stretches for about 375km (233 mi) from the Golfo de San Blas to Puerto Obaldía and includes nearly 400 islands and islets that extend to the peaks of the Serranías de San Blas and Darién. .

About 33,000 Gunas live in the Comarca de Guna Yala, with another 47,000 mainly  spread over two small inland comarcas in East Panama and Panama City, although the  population is in considerable flux due to constant to-ing and froing between the capital and the comarca. .

For the most part, people are clustered in a chain of 36 low-lying atolls near the coast, with 11 communities established offshore and two offshore.

In recent years, frequent flooding caused by rising sea levels has encouraged some island-based families to migrate to the mainland.

Plans are underway for entire communities to join them in the coming years, as their homes become more and more likely to be permanently submerged. There are basically two types of islands that are popular with tourists.

First, there are nearby uninhabited islands, topped with coconut palms and surrounded by white-sand beaches sheltered in turquoise waters, where coral reefs offer great opportunities for snorkeling (diving is prohibited in  Komarca  ).

The waters of the Western Archipelago, in particular, are dotted with these native islands, distinguished mainly by their accommodation, from the more densely populated village-islands with simple household beds, to slightly more comfortable accommodation, all owned by families or communities.

The villages, in contrast, are densely packed with coral, cane-forged buildings surrounded by cement buildings, schools, medical centers and the occasional shop. Rarely do they have a beach. The women are usually in their attractive traditional attire and can’t help but catch your attention.